About Susanne
2018
'Starting Over' releases, included in my first print book: 'Heart of the Town' released by Harlequin Mira.
First romantic suspense: 'High Stakes', set in Nepal, releases in April.
'Hearts of the Outback', bestselling six-book series concludes with The Cattleman's Promise in January.
2017
'Heart of the Outback' continues to be a bestselling series.
New group series accepted for publication by Escape Mira.
2016
2015
Beginning of my love affair with rural romance.
The year of second chances:
Second Chance Love
Second Chance Cafe
​​Winning the Heiress' Heart 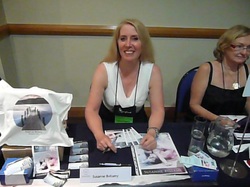 Susanne at the book signing
This month, I attended my first ARRC as an author. It was strange to be seated on the other side of the table and have readers approach me for MY autograph! I kept feeling I should be out there tracking down my favourite authors and discovering others new to me. Speaking of favourite authors, here's some of mine: Anna Campbell and Annie West, and there I am with Ann B Harrison and Annie Seaton. Haven't got a pic of Anne Gracie, but she was a fabulous keynote speaker at the event. And did you notice the wonderfully weird coincidence of names? What a weekend! 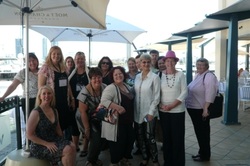 Diamonds Are Forever was the theme for the 21st annual RWA conference held in August at the QT on Queensland’s beautiful Gold Coast. It was a fantastic celebration of romance writers and the fun that is belonging to such an organisation. I met up with old friends and made new ones over the four days of workshops, speeches and get-togethers in the bar. Moonlight Martinis (aka True Blood!) were a fab find and definitely “to die for”!

Fifteen lucky members, including me, enjoyed a tour of Palazzo Versace. We were driven in stretch limos and treated to champers on the way there, then given a tour of the increasingly luxurious rooms and suites, finishing at the condos in one of which, we were assured, Rod Stewart had stayed. The tour ended with a High Tea—I highly recommend the experience.