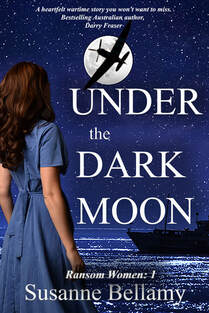 Read on for free on Kindle Unlimited, or purchase from Amazon: US store   Australia    UK

“Blue team is in position. Green team, are you set?” Paul Rimmer spoke into the comm unit on his shoulder. Having confirmed his teams were in place around the perimeter of the warehouse and the exclusive brothel owned by the Chan family, he gave the signal. Power shut down, streetlights flicked off and the Rocks area was plunged into darkness. Moments later, a rooftop generator kicked in and lights flickered on within the brothel, his team’s target.
He glanced at his watch. One minute after twenty-three hundred hours.
Breathing slowly, he used his night scope to scan the shadows between the building and the dark rocky upthrust that had given the area its name.
No movement.
More teams awaited his signal to begin a combined multi-pronged raid on the Chan mansion and three sites in Sydney from where the cartel’s illegal businesses operated.
Focused on his entry point, calm descended. He and his partner, Tamsin Westcott, had risked their lives to get information that had led to tonight’s raid. Even Tam’s twin sister had been caught up in their investigation and now, Bureau agents were about to close the net. Determined not to let a single member of the drug cartel escape, Paul checked his watch, and raised his comm unit to give the signal. “On my word . . .” He drew a deep breath. “All teams are go.”
Cordoned off and locked down, the dark streets around the warehouse and brothel exploded with dark-uniformed officers hitting their assigned points of entry.
Paul led his team through the front door. An intimately small reception area was unoccupied, but a security camera began tracking their progress before Paul shot it out. He took the entry into a spacious L-shaped club lounge. Blacked out windows were mostly hidden by heavy red drapes, while several decadently padded couches were set at strategic points around the room. All were angled towards a low dais, which Paul saw as he turned the corner into the long leg of the L.
Two men seated on couches raised their hands. Considering the girls positioned beside and behind one, with a third girl on the floor between the legs of the other man, Paul dismissed them as clients. The third girl looked up at Paul and his team and the only sound in the room was the soft pop-slurp as her lips left her client’s cock.
But they weren’t Paul’s primary target. Leaving the men and girls to be collected by the sweep team, Paul signalled his partner, Grant Perkins. They moved into position on either side of the dais, guns at the ready. A dark-green feather lay on the scuffed and polished floor.
Paul glanced back at the tableau of clients and girls and his gut tightened. The youngest of the three still knelt between her client’s knees, a boa draped around her neck.
The girls servicing the two clients were little more than teenagers, and this dais was apparently a stage for clients to view a parade of women and make their selection. Like a bloody meat mart.
Perkins led the way along a short besser-brick hallway with a single door at the far end. Unpainted and poorly lit, it was clear the hallway was only used by the working girls as a passage from the lounge to the rooms where they plied their trade. According to the building plans the door led to the business side of the brothel; a selection of theme rooms catering to all tastes and wallet sizes.
Gritting his teeth, Paul opened the fire door. Ahead lay a small, tastefully decorated foyer with six heavily carved and painted doors punctuated by another wider hallway that connected back to the lounge. Rich clients were given the royal treatment when they came into this part of the brothel. Upstairs, the Green team would be picking up clients and working girls from the cheaper rooms.
Methodically the two agents separated left and right, each taking a set of doors along one side and working their way through the rooms. Paul disturbed two men attended by a single woman in the first room; the middle room was vacant. In the third room, styled as a dungeon, a client, bound and leather-clad, was being beaten with a riding crop.
Paul turned and signalled to Perkins that he’d take the last room. Information said this was John Chan’s private room, and the last intel report had indicated he had left home for an evening at the brothel.
Moving into position, Paul pushed the door wide and did a sweep around the spacious, high-ceilinged room, finishing with his gun aimed towards a king-sized bed. A young woman sprawled naked and alone on the bed, her dark hair fanned across the pillow—beautiful and unmoving.
Not the reaction Paul expected.
Cautiously he made his way to her side and set his fingers on her neck.
No pulse.
Her wide-open eyes stared sightlessly at the distant ceiling. Partly concealed beneath her shoulder, a ripped plastic bag suggested how she’d died.
Perkins appeared in the doorway. “Anything?” He approached the bed. “Aw, shit.”
Paul gently closed her eyes. “I want Chan in handcuffs before we leave.”
“Sounds kinky, boss.”
Sometimes humour helped them confront the worst of humanity. And then there was now.
Paul gritted his teeth so hard his jaw ached. “Not now, Perkins.”
Perkins flicked a glance at the dead girl. “You’re right. Sorry.”